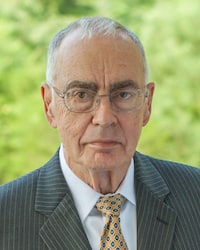 Frederick D. Greco was born in 1937, graduated from American University Law School of Washington, D.C. in 1962, and served in the United States Navy from 1962 to 1964. He has practiced law in McLean, Virginia since 1964. Mr. Greco worked as a general law practitioner from 1964 to 1974. Since 1974, his primary practice area has been commercial and securities law litigation.

An experienced litigator, Frederick D. Greco has concentrated over the last three decades on representing plaintiffs and defendants in trial and arbitration claims against stock brokers and brokerage firms. In arbitration, Mr. Greco has argued cases before New York Stock Exchange (NYSE) arbitration panels as well as panels of the National Association of Securities Dealers (NASD) and FINRA. Mr. Greco also serves as a neutral arbitrator in securities arbitrations and has lectured on securities law to fellow attorneys in continuing legal education classes.

Contact Us
Practice Areas
Client Reviews
★★★★★
“Greco & Greco represented me several years ago in a case in which my financial planner ignored my investment guidelines in making several very risky investments in my name. This individual was employed by a very large financial services corporation which refused to return my funds. I retained Greco & Greco.This after a few months resulted in a face to face negotiation with a team from the corporate office which supported the financial planner. After several hours including many strategy breaks and rejected offers a satisfactory settlement was reached. Without the skilled representation of Greco & Greco we would not have won such a settlement. I was very pleased with all aspects of their service including their timely feedback throughout the case.” J. W.
★★★★★
“Very professional and compassionate representation by this firm. Communication was clear and concise. This firm has a high degree of integrity and knowledge of SEC law. Highly recommend.” C. A.
★★★★★
“Very good attorney - client communication. Great legal representation. Satisfying results. A. W.
★★★★★
“Scott Greco was very professional, and honest. I highly recommend this firm. Scott Greco explained everything in a way I could understand, and I never left the office with unanswered questions. If I ever need any other legal representation Greco & Greco, P.C will be my only choice.” Anonymous
★★★★★
“W. Scott Greco represented me in my attempt to recover money lost in a ponzi scheme. He kindly and skillfully guided me through the process of submitting the required documentation of loss, provided sound legal advice regarding accepting arbitration, and kept me fully informed as the case moved forward. As a result of his work on my behalf, I recovered a large portion of my lost funds. I would absolutely, without reservation, recommend this firm to others.” Anonymous
VIEW MORE
Submit a Law Firm Client Review